The effects of La Niña on the Niseko area

53% of the time, Niseko has out-performed it's
average snowfall during La Niña cycles

BUT don't start getting excited just yet; the 53% average is mostly being carried by numbers before 1989 (notice how the orange lines go up higher on the left side of the chart than the right). From 1989 and beyond, La Niña is mostly associated with below-average snowfall, which could indicate a change in long-term trends in the region.
​ 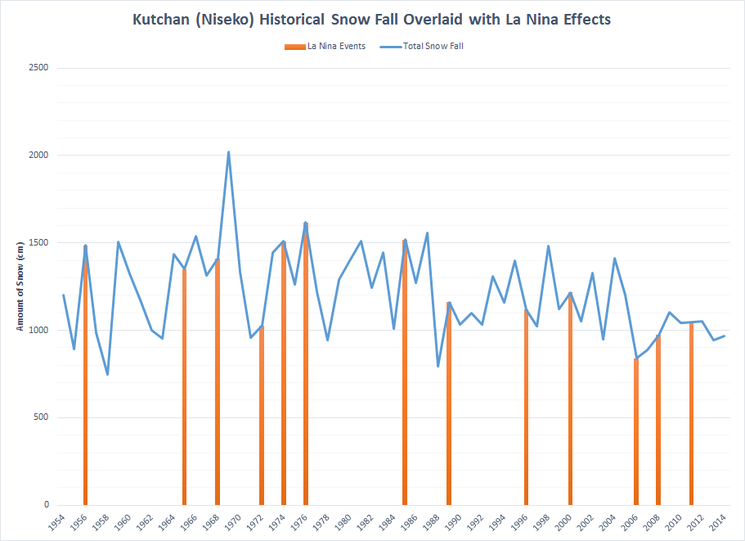 The blue line in the chart below denotes how much snowfall was recorded by the Japan Meteorological Agency (JMA) for the time span of 1953 to 2014 (years located on the X-axis). The intersecting orange bars indicate La Niña years recorded by JMA, specific to Japan.

How does Niseko compare to other regions in Japan?

The chart above shows historical snow fall data for the town of Kutchan, located 16 minutes from the Hirafu base of Niseko United. The elevation of Kutchan is just under 200m while the elevation of the Niseko resorts ranges from 320m to 1,200m; the difference in elevation means that Niseko will receive more snow, but that Kutchan is close enough to extrapolate general trends in the area.