What effect will La Niña have on the Hakuba region?

During La Niña cycles, Nagano outperforms the average snowfall only 39% of the time

While the odds of a good snow year in Nagano aren't great, its not as bad as the 17% chance forecasted for the 2015/16 El Niño season which ended up being pretty accurate (you can view that forecast here). 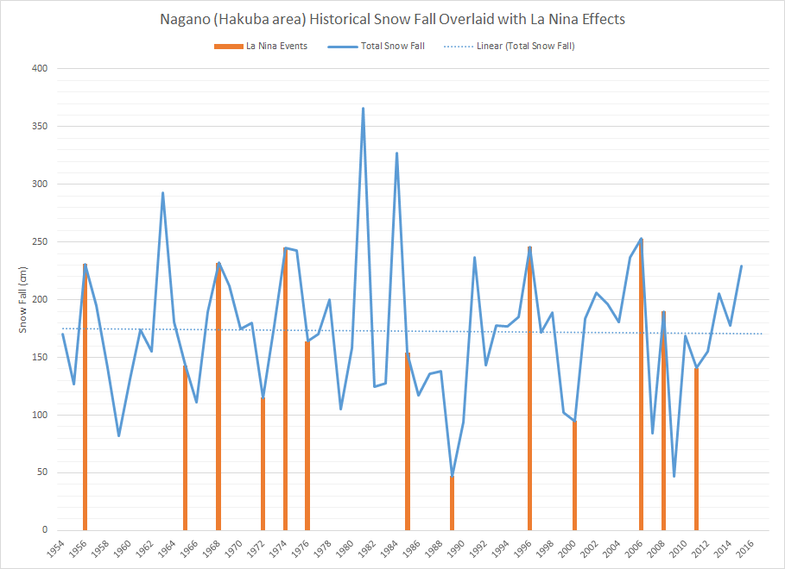 
The blue line in the chart below denotes how much snow fall was recorded by the Japan Meteorological Agency (JMA) for the time span of 1953 to 2014 (years located on the X-axis). The intersecting orange bars indicate La Niña years recorded by JMA for Japan.

The historical snowfall data in the Nagano region suggest that La Niña cycles are not average years; they either bring in a lot of snow or noticeably less than the average. Some La Niña years such as 1972, 1989 and 2000  show a decline in snow fall during the La Niña cycle, while 1974 and 1996 show a peak of snowfall relative to the average.

How does Hakuba compare to other regions in Japan?

Some other technical mumbo-jumbo:

The first thing you should note about this chart is that the Japan Meteorological Agency (JMA) doesn't have a weather station closer to Hakuba than Nagano City.  The chart above shows historical snow fall data for the city of Nagano, one hour from the main Hakuba base. The elevation of Nagano is 400m while the main Happo-One base at Hakuba is located at an elevation of 760m. As mentioned above, the weather systems between Hakuba and Nagano vary significantly with Hakuba receiving much more snow than Nagano. However, it may be possible to extrapolate general trends in the region by analyzing historical weather data from the JMA Nagano weather station.