The effects of La Niña on the Myoko region

Historically, La Niña brings a 46% chance of an above-average snow year in the Niigata region

During the 13 La Niña cycles listed below, 7 years had snowfall below the average and 6 years had snow fall above the average, indicating that a La Niña cycle in the Niigata region historically brings a higher likelihood of slightly-blow-average snowfall. While the average may slightly favor an below-average dump, the chart suggests that La Niña in this region is historically a gamble with huge rewards when its on (see 2011), and big disappointments when its not (see 2006).

The data point to the effects of La Niña in the Myoko/Niigata region to be big. Unfortunately for us, history doesn't give us any strong indicator of which way that big influence is going to go. This year looks like a gamble, but if it wins it looks like it'll win really big. For years with big wins (high snowfall), see 1985, 2000, and 2011 on the chart below. For years with big losses (low snowfall) see 1965, 1972 and 2006.

The blue line in the chart below denotes how much snow fall was recorded by the Japan Meteorological Agency (JMA) for the time span of 1953 to 2014 (years located on the X-axis). The intersecting orange bars indicate La Niña years recorded by JMA for Japan. 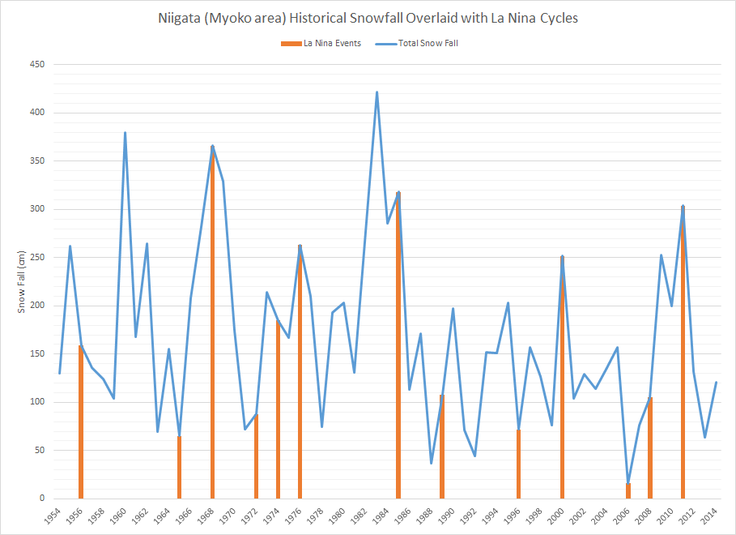 Historical snowfall analysis
How does the Myoko region compare to other regions in Japan?

﻿﻿Some other technical mumbo-jumbo:

The chart above shows historical snow fall data for the city of Niigata, 2 hours from the main Myoko Plateau. The elevation of Niigata is basically sea level, compared to Akakura Kanko ski area in Myoko which is located at 700m. While the difference in elevation is big, Niigata and Myoko can be generally compared as they're both on the west coast and among the first areas to get hit by the snow storms which predominantly come off the Sea of Japan.

The first thing you should note about this chart is that the Japan Meteorological Agency (JMA) doesn't have a weather station closer to Myoko than Niigata (from what this investigator could figure out). While Niigata is relatively close, it does get significantly less snow than the higher elevation plateau that Myoko is located on. However, given that they're in the same region and prone to the same general weather influences on the West coast  of Japan the data for Niigata should reflect the overall conditions of Myoko, Madarao, Akakura Kanko, and Akakura Onsen, among the other resorts in that region.